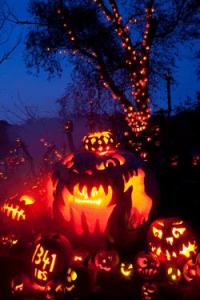 This Year We finally made it to the Roger Williams Park Zoo Jack-O-Lantern Spectacular; another item knocked out of my Places to Visit in RI list.  I’ve been wanting to attend this event for about 10 years now.  Tried it back in 2004 but the line was soooooooo long that after waiting for about 45 minutes, with two toddlers in tow, and no other adult to help; I quit and turned around when an announcement was made letting everyone know that strollers were not allowed once inside the trail. Strollers ARE allowed nowadays, of course, my kids no longer require them.

This event is attended by thousands of visitors each year, and it runs throughout the month of October.  On weekend nights the lines are so long that wait time could be up to 2 hours.  This year we went on a Monday night and we were able to purchase our tickets without waiting in line;

once inside the zoo there was a bit of a line before getting to the actual Jack-O-Lantern trail, but it wasn’t bad, and they had fun signs with info about the event and trivia questions to keep us entertained.

The actual display was truly spectacular, displaying about 5,000 carved and lit pumpkins.  This year’s theme was Journey Around the World, and

stations included Italy, England, Asia, Mexico, Cuba, India, and the North Pole, among others.  My favorite were India and Asia.  Each station had background music to go along with the theme, such as The Beatles for England. There were carvings of The Leaning Tower of Pisa, Gandhi, Fidel Castro, Mariachis, a Geisha, and even an “In Memory Of” section, which included a carving of Steve Jobs.  I totally recommend this as a fun fall family outing.