The Buddhist Monk and The Smart Cell Phone: Who Would Have Thonk It! 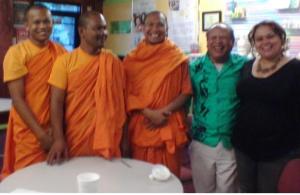 Mack is wearing the green shirt, to the left is Sochettra, the Head Monk, Talh (I know I butchered it) and Sochettra's brother

As many of you know, I visit a Nutrition Center where, in addition to having a healthy meal, I get to socialize with a group of friends.  This has become a part of my daily routine I happily look forward to, as it is a moment for me to unwind, and just enjoy mindless chit-chat.

At the nutrition club I met my friend Mack, who is originally from Cambodia and has lived in the States for many, many years.  Recently, I was very surprised when one day after work I went to the club and found Mack seating at a table with two Buddhist Monks who were wrapped up in bright orange robes. 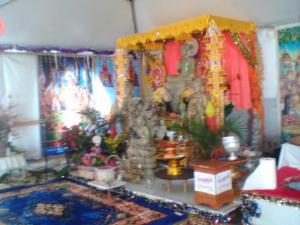 Being the curious creature I am, my rear end promptly found a seat right at their table, and after being introduced to the Monks by Mack, my brain started formulating all sorts of questions, which they kindly answered.

For your benefit, I am posting all my new found knowledge about Buddhist Monks right here (you can thank me later :).)

Ok, so I didn’t gather all the profoundly spiritual information you might be expecting.  I went for the most basic stuff like:  You have a cell phone!!! Are you kidding me? A Buddhist Monk with a smart cell phone, which by the way is much smarter than mine???  Apparently, although they are required to make a vow of material detachment, these rules were made long ago, so naturally cell phones were not contemplated because they didn’t exist, thus cell phones are not against the rules – bet you didn’t know that! Other things I learned:

I am of the Christian faith; and my curiosity in the Buddhist Monks was mostly cultural.  I believe in learning about, and taking an interest in, people in general, and I try to teach this to my kids as well.  Of course, you know once I found out that their temple was right in one of the nearby neighborhoods, a visit was promptly planned .

I had driven by the area many times without noticing that one of the houses was actually a Buddhist Temple!  My son came with; together,  along with other members of the community, we sat on the floor while the Monks had their lunch.  They kindly let us try some of the food, including some dry semi-sweet meat, and some ripe plantains in a light green sauce for dessert.  Mack was also at the temple on the day of my visit and he gave Aleck and I a mini tour of the place.

My boy was so curious about this whole new culture for him.  It was a good experience, he got to greet the head monk,  Sochettra, as well as sit on his special chair.  Also, my son was asked to join a Cambodian language class thought at the temple on weekends; Aleck is excited about the idea. Later that day, I received a text message from Sochettra thanking us for our visit.

I am, simply put, a work in progress...
View all posts by Carola »
← Dinner with Friends
Special Date: Brunch and Flowers →